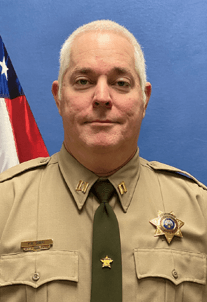 Captain Kevin Smart began his Law Enforcement career via the NIC Law Enforcement Program. Upon completion of this program he reserved for Coeur d'Alene PD and was then hired full time with the Kootenai County Sheriff’s Department in 1997 as a Detention Deputy.   He then transferred to the Patrol Division in 2001.  As a Patrol Deputy Sheriff he was part of the District Deputy program of Harrison and later Hayden and also fulfilled a role as a Field Training Officer.  Over the course of his time as a Patrol Sergeant he held several different roles overseeing the Traffic Team, Field Training units, the K9 team and the Civil Section.  Upon promotion to Lt., he filled the role at 911 overseeing the daily operations.  As a Captain, he has completed assignments as the Support Services Bureau and currently oversees the Operations Bureau.

He and his Wife April reside in within Kootenai County and are the proud parents of a daughter and a son. Captain Smart is Proud to be able to be a part of such a great organization, serving alongside the men and women of the organization and to serve the citizens of Kootenai County.